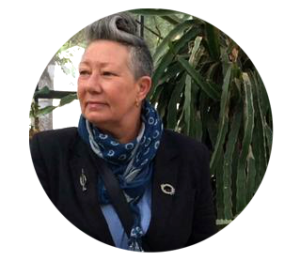 Moira Anne Meyer was born in Windhoek Namibia in the 1950’s. Went to school in Omaruru and Otjiwarongo. From an early age had a creative slant to live. Always wanting to paint and sketch. Was labeled fashion forward at 12! Father was a mine manager and the mother a matron in the local hospital.

Growing up in a conservative Middel class family did not encourage studying art and thus completed a BA degree in Psychology + Sociology and a BA Hons degree in Sociology at Stellenbosch University South Africa in 1978. It was after a year traveling abroad that Moira Anne Meyer decided to study Fashion Design at Leggats Academy of Design in Johannesburg South Africa.

Upon graduation did an internship in a knitting factory but shortly decided that it was creatively too limiting and took a job as a Wardrobe Assistant on a TV Series. After the second assisting job decided to be the Designer and thus started a 30 year career of TV Commercials, TV Series and Feature Films. Spend 5 years on the Balearic island Formentera designing clothes for a Boutique and worked in Sweden on a Organic Fashion Brand in the 1980’s.

Lived and worked in Mauritius with Spice Clothing in the late 90’s and then settled in Cape Town South Africa. The Commercial and Film Industry in Cape Town is prolific. Moira Anne Meyer had the opportunity to do numerous International feature films as Costume Supervisor LORD OF WAR (2005), BLOOD DIAMOND(2006) and ASK THE DUST(2006) with Colin Farrell + Salma Hayek directed by Robert Towne (Oscar winner for Chinatown screenplay). Worked with Kathryn Bigelow in 2008 on THE HURT LOCKER (won 110 Awards including 6 Oscars) in Amman Jordan.